"Write Your Greatest Hits" - Excuse me, WHAT?

As almost everyone knows, I am an adoptee. My parents adopted me when I was around six weeks old (kind of like a puppy), and I've always known I was adopted. It was just part of the description of me: I have a big mouth, brown hair, brown eyes, and am adopted. It never bothered me; in fact it was one of the few things that made me feel special.

BUT... As an adoptee you get asked a lot of questions.

Do you know who your "real" parents?
Yeah, they're my parents.

Is your brother adopted too?
Yes.

Were you a set?
What, like salt and pepper shakers? Buy one get one?

My mom was always pretty open when I asked her questions about my biological parents, but being a closed adoption, there wasn't a lot of information. She understood that I wasn't asking because I wished she wasn't my mom, I was just curious. It was such a mystery. Who do I look like? Where did my curly hair come from? Were they tall or short? Thin or chunky?

When I went through my rebellious teen years, I never had this fantasy that I would go find my "real" family because they would understand me and accept me. My father was Gary - the guy who worked overtime to pay for my braces, and my mother was Pat - the woman who baked me a pink cake and made me lasagna every birthday. I was an asshole teenager because teenagers are assholes, not because I was adopted.

As I got older, the depth of my personal history mystery became more obvious. When you start having regular doctor's appointments, and are filling out medical history forms, I always had to write "Unknown - adopted". Which made things super fun because doctors then had to test like I had a family history of everything because I didn't know.

If I had to pick the one and probably only time that my being adopted deeply affected me, it was the day Quinn was born. I remember holding him in my arms and staring at him and it hitting me - this is the first blood relative in the world that I actually know. That feeling was enormous. Indescribable really. I finally had a person.

I can't speak to how adoption feels for everyone. But for me, it always felt a little like, "Andrea - party of one."  Sure, I had loving parents, and a tolerant brother, and a nice house, with food on the table every night, clean clothes, good opportunities. I have nothing to complain about whatsoever when it comes to my childhood. It's just that - there's just you. You can't say, "I have my grandmother's eyes" or "I look like my great Aunt Meredith" because you don't know. There's just you. Everyone else seemed to have connections; they had roots. I was the string of a balloon, floating off into the sky.

It can be lonely. It can be isolating. Maybe not for everyone, but it certainly was for me. My therapist (of seven years) has tried to say I have abandonment issues, but I don't really think I do. It doesn't feel like I do. I'm just not very comfortable discussing me.  Ask me what I think about some thing, I am free with my opinions. Ask my feelings on a particular topic, and I can give passionate support or dissent about it. Ask me how I feel about... me? I clam up. No thank you, next question.

Anyway... my father called me this weekend. After three voicemails, two texts, and several back and forth calls, we finally spoke with each other. He had a letter from the agency through which I was adopted. It had my name, my date of birth, and the letter said something like "we understand you're her father. Please call."

Me: What? It says you're my dad?
Him: Yes.
Me: And they want you to call?
Him: Yes.
Me: Why do they want you to call?
Him: I dunno. I assume it's something about you.
Me: Why wouldn't they just call me?
Him: Maybe they don't know who you are.
Me: My name is on the letter... how do they not know? What does it say again?
Him: [reads letter]
Me: What?

Continue like this for 5-10 mins.  Finally I just asked for the guy's name and phone number and said I'd call him.

Which I did. Today.

My biological mother's name is Kathy. She lives in Northern Michigan. She's been married for 40 years. She was a seamstress. I have two siblings (whole or half - I don't know). She's been wanting to find me for a while, but finally worked up the courage. The social worker wasn't sure what the impetus was - he was on vacation and didn't have his files with him but called me back so as to not leave me waiting.

The social said some other things, but I can't really remember what they were because somehow, an entire swarm of bees entered my brain and I ceased to have the ability to hear.

The social worker asked what I thought. I told him, honestly, I don't know. This is a... surprise. Shock. Bombshell. This was... holy shit.

He said let's take things slow. That he would give me more information when he returned to his office. In the meantime, he wanted me to write down some of my "greatest hits" - the story of my life. Some things I would want her to know.

Um... what? Oh my gosh. I don't know. I don't know! Then, suddenly, the bees cleared for a second and I said breathlessly, as if I wouldn't have a chance to get the words out, "Please tell her thank you for making the selfless decision to put me up for adoption. I know it couldn't have been easy and I want her to know, I harbor no ill will towards her and never have. What she did was courageous. All in all, I had a pretty good childhood and any struggles I had had nothing to do with being adopted. She shouldn't feel guilty - my life has turned out pretty okay."

And now I'm supposed to write the story of me. Holy. Shit.

So, dear Reader. I need some help. For reals. Tell me a story of me. A memory. A moment. Tell me something. Because - I don't know. Tell me the good, the bad, the ugly. The happy, the sad. The helpful or the hurtful. Tell me. Because I need help here and y'all know I don't ask for that easily. This is a journey I never imagined I would go on.

I never know quite how to answer this question. And I get asked it a LOT. We're lucky we have so many people concerned about Claire's welfare but the reality of how Claire IS is kind of a bummer.

Claire has progressive, incurable brain disease. Couple key words there. "Progressive" means it's going to get worse, and "incurable" means there is no cure. While there is a treatment for Moyamoya disease - surgery - Claire currently isn't a candidate. The disease is progressing in Claire's middle cerebral artery at the moment, which isn't exactly accessible for surgery. There's really only one of two ways this could go: the disease could begin to progress outward, in which case surgery may eventually be a viable option; or it could progress inward, in which case it will be fatal.

We had a pretty good run for a few months. Claire went the entire summer without having a single TIA (that we knew of). We've been told that she has them in her sleep so, the days she didn't wake up all wide-eyed and bushy-tailed as usual, it's possible she had one during the night. But she did not have any observed incidents for three months. 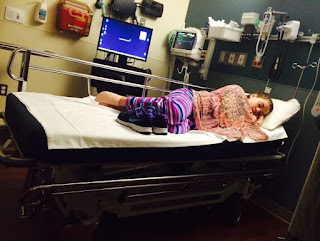 She had one four days ago though. A scary one. One that lasted longer than some of the previous TIAs and one that had me thinking maybe it was time to take that helicopter ride to the big hospital. She came out of it eventually, but she's still not quite back to full Claireness... and maybe she won't ever be.

Because... progressive. Incurable. Not a surgical candidate.

Claire is not going to "get better". In fact, she's going to get worse, and worse yet until hopefully she gets bad enough that surgery would be an option, but not bad enough that she dies. And while I don't spend a lot of time thinking about that - some days it just reaches up and smacks me in the face.

Claire does a wonderful job of living each day in the moment, and as much as possible I try to follow her lead. I don't like to think about the stark realities of what her future holds.

How is Claire? Today she is smiling. She is happy. She is alive. 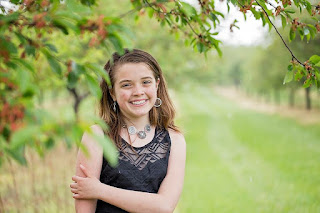