A few days ago there was an article shared in one of my Moyamoya groups about a little boy in Australia who was going to meet his hero, Johnny Depp. He'd shared a picture of himself on Facebook and it went around the world and got in front of the right people and - ahh the wonders of social media - Captain Jack was going to see him.

Which got me thinking...

When the subject of Make a Wish came up when Claire went through what we now know is the first of several surgeries, Claire said, "well, I can't go to Disney so that's out. But I'd really like to meet P!nk. Oh, and go to Paris!"

In the course of testing, diagnosis, surgery, recovery, relapse, TIAs, more testing - you get the picture - the dream of meeting P!nk got pushed to the side. Until today. So, here's my open letter to P!nk...

Claire's favorite song is "So What" - she can rock the heck out of it at karaoke. Her vocal coach has worked with her on "Just Give Me a Reason" but she struggles with the low notes.  And she doesn't have Nate Ruess to sing with her.

She loves it when you're on Ellen. We watch the clips when she gets out of school. Her favorite one is when you talked about dancing around and being goofy with Willow and how you think it's funny when she's mad at you. She could totally relate to how Willow must feel.

In the interest of full disclosure, as much as she likes your love songs, she thinks your songs from "Funhouse" are, well, funnier. Ahhhh, she's 11. She has a few more years before she will learn the truth about love.

Watching videos of your performance of "Glitter in the Air" at the Grammys made her want to learn how to do silks.  Yeah - she thinks it's pretty badass that you can sing so beautifully while doing all your own stunts. Claire is a kid who can appreciate badassery.

See, two years ago Claire was diagnosed with a rare form of incurable brain disease called Moyamoya. She'd suffered multiple hemorrhagic strokes before being diagnosed and underwent brain surgery in December of 2012 when she was nine.

Since then, she's suffered dozens of mini-strokes, learned how much fun it is to be driven around in an ambulance, had more IV sticks and needle pokes than I'd like to think about, and in just a few months will be meeting with her neurosurgeon to discuss when her next surgery will be.

And before that happens... she'd kind of like to meet you.

We wanted to see your concert in 2014 but we missed the dates that were close to us. And we've been watching to see if you're doing another concert in 2015 - but haven't seen any news yet

I know you're busy being a mom, and a wife, and an overall superstar in Malibu and we live in Podunk, Michigan. But... the kid has a dream and it's my job to try to put those dreams within her reach.

So, here's my request: if you're ever in Michigan, can we meet you and say hi? Because I'd really like it if my hero could meet hers. 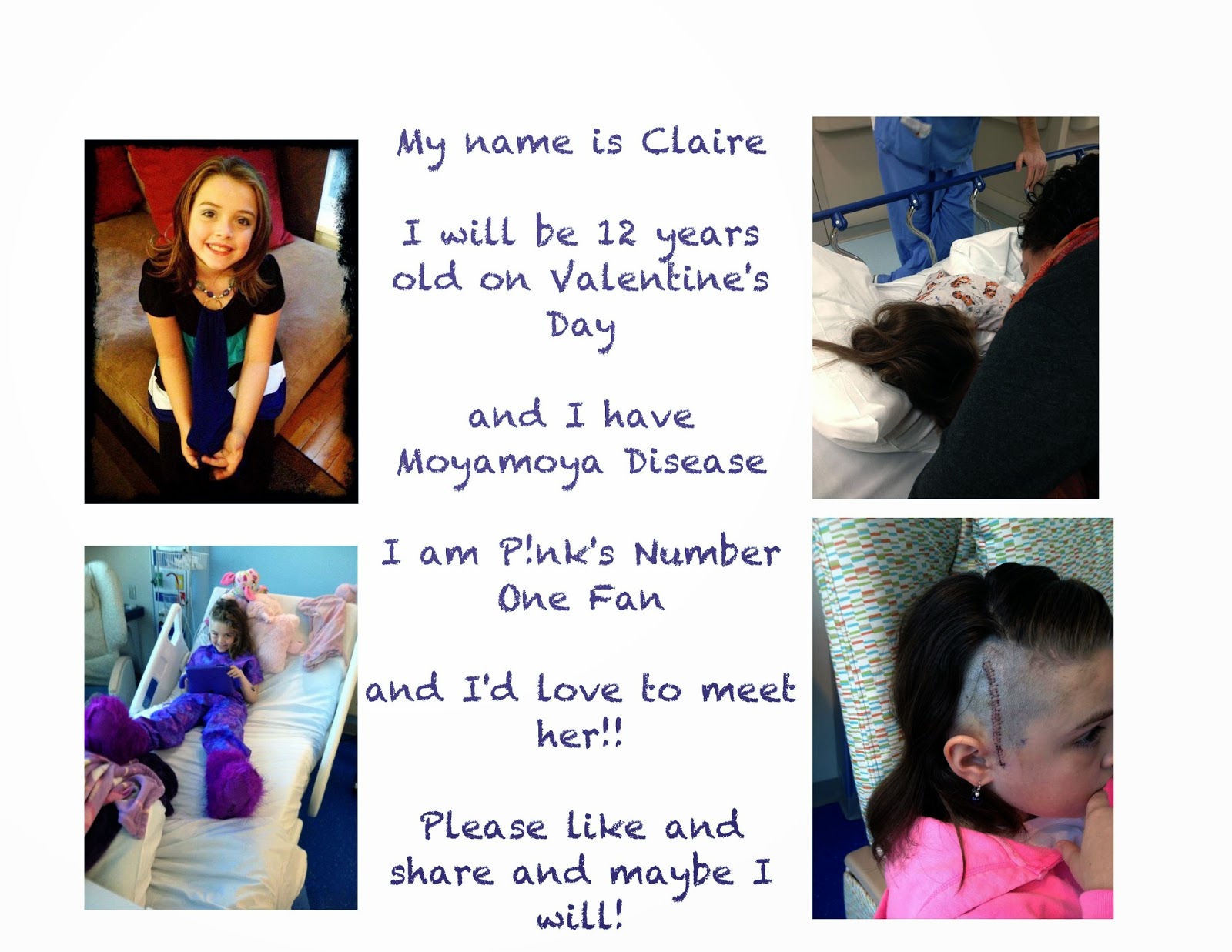