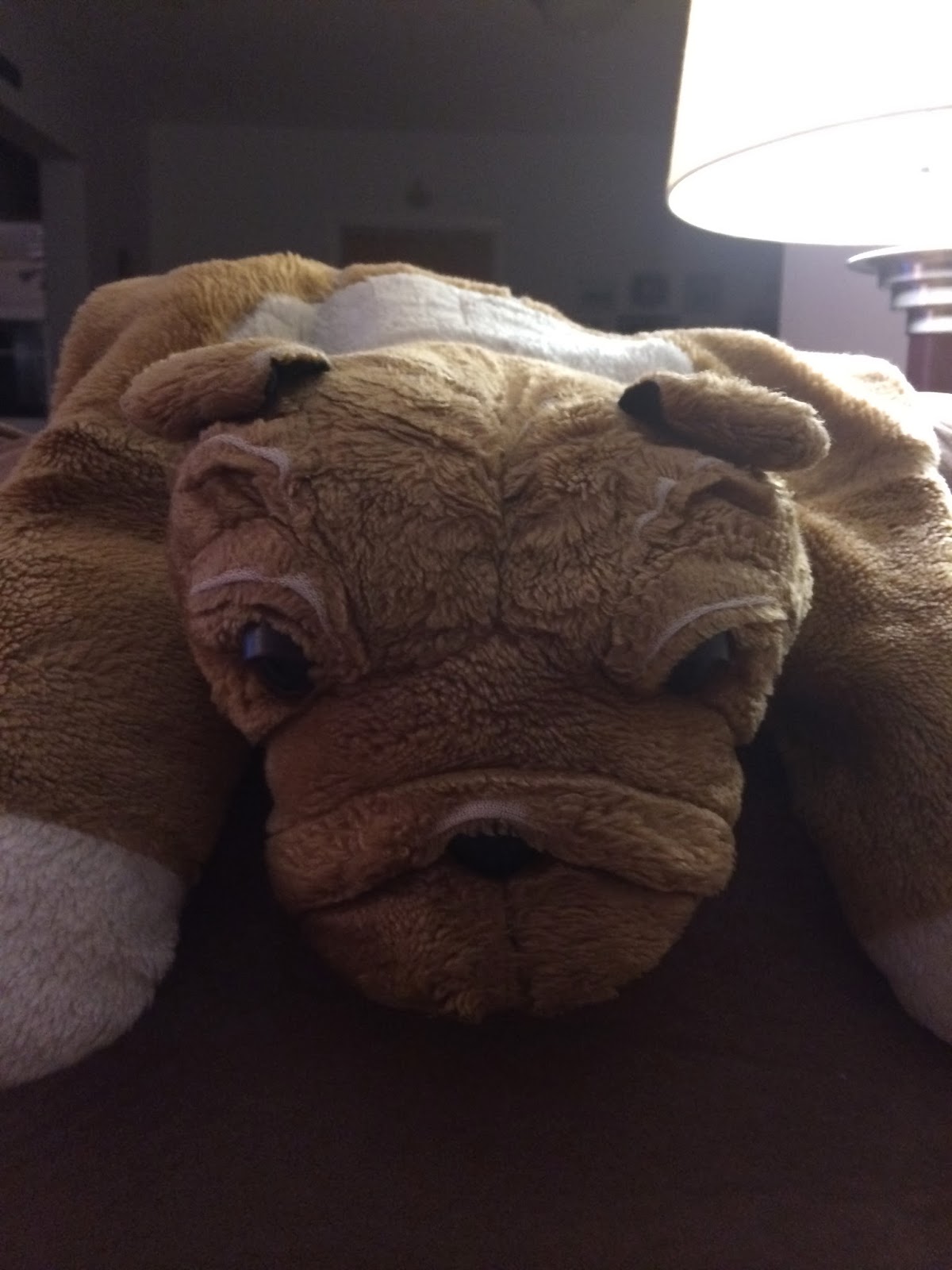 “'Real isn't how you are made,' said the Skin Horse. 'It's a thing that happens to you. When a child loves you for a long, long time, not just to play with, but REALLY loves you, then you become Real."
~~~

When Quinn was a roly-poly, dimpled cherub, all of about five months old, I had him wedged in the shopping cart during a trip to the Meijer in Illinois. We were strolling through the baby aisles in search of bargains when I happened upon this weird stuffed animal pillow thing with a dog’s face. It had been tossed onto a random shelf and I picked it up to show it to Quinn.  His entire face lit up like the 4th of July and he began kicking and squealing and flailing away in that “MINE!” gesture typical of babies and toddlers.

I handed him the stuffed toy and he immediately plopped his drooling face down onto it, snuggled in, and started cooing. And I thought, “Uh oh.”

You see, we were poor in the way all first time parents are poor.  No one really explains to you, not really, how expensive babies are. It’s more than just diapers and formula (yes, Quinn was a formula baby). It was lotions and diaper cream and onesies and baby Tylenol and a million other things that seemed to pop up on a daily basis.  We were broke.  Stuffed animals were expensive and were a luxury we could not afford.

But Quinn bonded with this weird brown dog thing immediately. All the other stuffed toys that were given to us when he was born he showed absolutely no interest in. But this thing, I was already imagining the heartbreak of leaving it behind.

Except... there was no price tag.

I started to look around the store, trying to find other stuffed animals like this one. He was one of a kind and Quinn was NOT going to let him go.  I gently tried to pry his chubby fists away from it, but he was not budging.  Quinn had claimed him for his very own.

Panicked, I approached a sales associate and asked her how much the thing was. Quinn wouldn’t let go enough for me to even let the clerk get a good look at it. I must have been oozing desperation because the clerk took a good look at me, a good look at the fat little boy who had this lovey clenched in both hands and said to me, “You tell the cashier that Marge said the price is $4.”

Every night of his life, for 13 years, Quinn has slept with who he eventually named Chewie.  He has slept with him in hospitals, and at friends’ houses. Chewie has traveled via plane, train, and automobile with us.  He has traveled to school and to Grandma’s house. He is part of our fire evacuation plan. He has been patched up and sewn back together and loved and loved and loved. He is never left behind.

Today Quinn packed up his sleeping bag, his pillow, and Chewie, preparing to go to his very first middle-school lock in. And as he placed Chewie on top of his pillow, getting ready to leave, he stopped and looked at him. He seemed to ponder him deeply. And then Quinn placed his hand on top of his constant companion of 13 years and said, “I think I’m going to leave Chewie home. I wouldn’t want anything to happen to him.”

So, I carried Chewie over to the sofa with promises that we’d take good care of him, my heart breaking a little bit.

Before he left, Quinn walked over, rubbed his hand over Chewie’s ear, then grabbed his backpack, and walked out the door.

“Generally, by the time you are Real, most of your hair has been loved off, and your eyes drop out and you get loose in the joints and very shabby. But these things don't matter at all, because once you are Real you can't be ugly, except to people who don't understand.”

Posted by Musing Mama at 8:25 PM No comments: