Not quite one year ago, I had to finally make the decision to get Quinn evaluated, assessed, and the thing I had avoided for nearly 10 years of school – labeled – with Autism Spectrum Disorder.  I’ve known since Quinn was but a wee lad he was a little “spectrumy” but, through tireless work with him on “social stories” (appropriate responses in social situations such as eye contact, body language, and communication), a wonderful school system in Minnesota which was willing to accommodate “Quinn’s Quirks”, and the benefit of very small classrooms once I moved him to the parochial school in Michigan – we never needed to go down that route. Not until his first year of middle school in the public school system.

As most adults will tell you, middle school is brutal. For a child who doesn’t understand the social nuances of a bunch of angsty teenagers, it’s even more so. At this time last year, Quinn was lonely, depressed, and borderline suicidal. Things were not going well and everything came to head in January of this year.

Not one to watch my precious, perfect-in-his-own-way, adorable son get beaten down by the ugliness that is middle school, I went into protective mode: we hooked Quinn into a fabulous church youth program run by a youth pastor with whom Quinn almost immediately formed a bond; we started meeting more often with his therapist; and I went to the school to get Quinn the accommodations he needs formalized and documented. He had three amazing teacher advocates – educators who took the time to get to know my kid, understand him, and connect with him (we love you, KC, RC, and KF-N!)

Almost immediately, things began to change. Quinn met some new people and started making friends – on his own! Trust me, for a child with ASD this is a huge development. He perked up, started communicating more, and became more positive. He matured in a huge way.

Fast forward to this school year.  Quinn successfully navigated 8th grade camp, his “friend circle” has grown to include so many people I have a hard time keeping track of all the names. Most importantly, Quinn has cultivated these friendships entirely on his own. It’s been an amazing journey.

This month, Quinn decided to run for student council. He had talked about it last year, but chickened out at the last minute, likely due to his low self-esteem and anxiety over his “new kid” status. We made up funny posters, hung them up all around the school, and he seemed pleased people liked his posters. We had several discussions over things like voting (“don’t forget to vote for yourself”), his platform (a buddy system for new kids), and the importance of school politics (“it looks great on a college application”).

When his funny posters got defaced with mustaches (kids!!), it was his sister who was steamed up about it. For him, it was water off a duck’s back. No big. 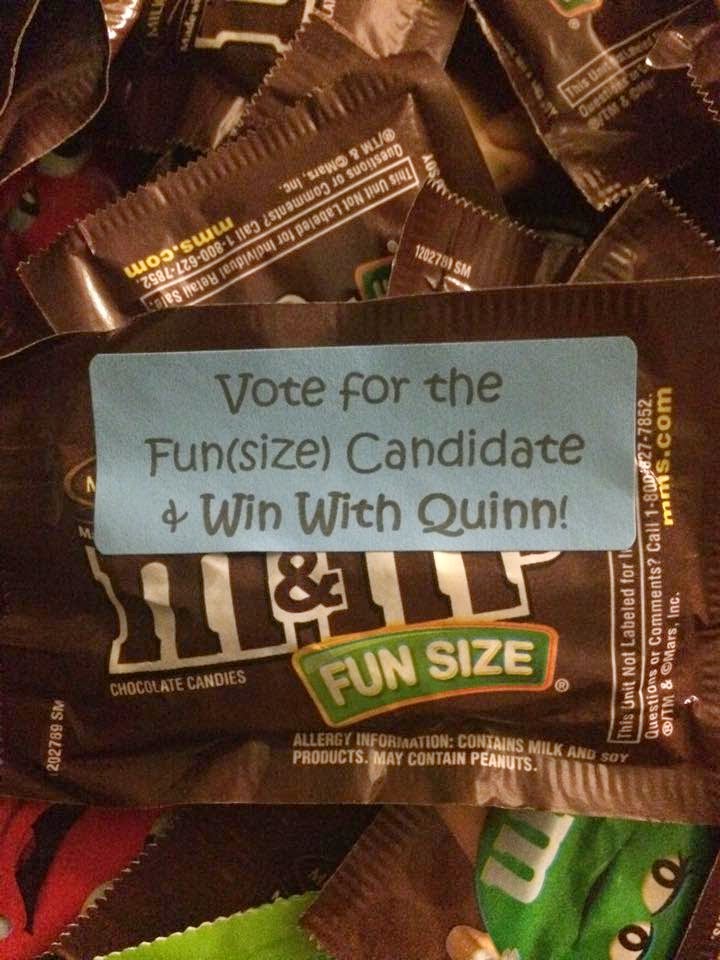 Today, Quinn handed out fun size candy bars (“Pick the Fun(size) Candidate & Win With Quinn!”) to his classmates. For a child with Asperger’s - that’s kind of a daunting task and he never thought he’d hand it all out – but by sixth hour it was gone. Kids were even wearing the removable stickers and saying “Win with Quinn!” in the hallways. He was beaming when I picked him up after school.

As we headed home, I started prepping him, “You know, it’s okay if you don’t win. There’s nothing to be upset about.”

“Mom! I know! And I am totally okay with it. Did I tell you kids were saying ‘Win with Quinn’ in the hallway? They came up and said they’d vote me! How cool is that?!?”

Dude. It is pretty cool indeed. No matter what the tally is, this was definitely a win for Quinn. I am proud every day to be this kid's mom.

Posted by Musing Mama at 6:38 PM No comments: